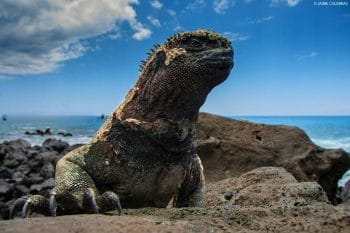 Friday, June 9th, Into the jungle, (1st photo not withstanding)

Jaime, professional wildlife photographer and guide, arrived at Villa DaFiore just in time for the group photo in the previous blog.  He is a good friend of Chelsea’s, and helped her while she was living in Ecuador. Jaime was born in Spain, but stayed once he came to Ecuador to stay.  He says that his English is poor, and he talks English as quickly as he speaks Spanish, so it was hard to follow him sometimes in either language.  It was easy to read his body language, though, as an exuberant, happy person who enjoys telling and playing jokes, and showing and telling about his wilderness discoveries. This is the dragon Jaime is about to slay, (in the kindest and gentlest of ways.)

We were less than an hour out of Quito, driving past the Cayambe Coca Ecological Reserve, when Jaime with his sharp eyes spotted a few black dots on a hill, and asked the bus driver to stop.  Can YOU see them?

The dots, seen through binoculars, were actually bears, as Jaime correctly predicted. The only bear in South America is the Oso de Antes Ojos, or Spectacled Bear, also known as the Andean (short-faced) Bear.  The bears are considered vulnerable, and are radio collared for tracking. Jaime says he has only seen 6 in 6 years. Gradually, we were able to make out three bears in a group in the middle of the hill, who proceeded to run up a trail as we got back onto the bus.

Our drive to Suchipakari took about four hours with a stop or two.

When we got close to our destination, we saw that the bridge to the little town was closed to buses (see the low hanging yellow bar across the entrance),

so we transferred into 4 or 5 taxis, bounced up a road for a half hour or so to a “taxi stand”, and then walked on an attractive path to the lodge for 15 minutes.  The staff went back and forth between this drop off point and the lodge. bringing the luggage either on their shoulders or in wheelbarrows.

A delicious lunch was served to us on the patio.  In Ecuador, most meals begin with a hot soup, and were always yummy in their variety.  Yucca and plantain were abundantly used for every eating purpose. After lunch, we had time to settle in to our lodges before our first group adventure.

Help us advocate, collaborate and educate.

Donate to A Frog House