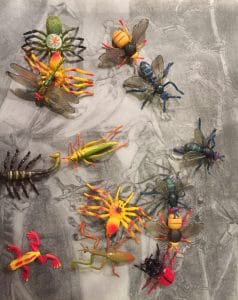 Arriving late on June 7th, it was around midnight when we got through customs, and I looked in vain for someone in the welcoming crowd with a sign with my name. Apparently our tour guide thought I was supposed to ask her to arrange a pick up, whereas Jana, my contact at Villa daFiore, had led me to believe that she herself was arranging it. Finally, as the people thinned out, I decided to take a regular taxi on my own. It was literally a “dark and stormy night”. After a good half hour, the driver, Patricio, turned off onto narrower and bumpier roads that twisted and went mostly up hills, and keeping in close touch with someone on the radio directing him, finally stopped in front of a gate.

Another Patricio was there, saying “yes, yes, this is the place, I was not expecting you.”

Ironically, another cab immediately pulled up behind us and Patricio welcomed Connor, a young man who had just graduated from high school and was coming on this adventure as well. We all piled with our luggage into another car inside the gate. Patricio, driving, backed down a very steep hill to the entrance of the lodge proper. He explained that the electricity was out in the entire area, and we could not use candles, so after struggling with a broken luggage pull, I fumbled my way into bed.

The sun was brilliant the next day. I opened the balcony doors, to this view.  In the garden was an elfish man, sartorially dressed in field clothes, a tropical photo-vest and camouflage hat, leaning over some flowers with his obviously professional camera.

“Good morning” I called. “Are you with Save the Frogs!?” Of course this man, with a ruddy face and happy smile, was. His name is Melvin.

We became friends with one another and with Connor, a very quiet  young man, at breakfast.

No activities were planned until 6, so I entertained myself walking around the perimeters of the grounds, where I saw the same kind of barriers to entry that I had known in 1953 in Mexico City.

The wall is topped with broken blue glass all around, which struck me as a rather lovely although threatening barrier.

My room is in the upper left hand corner of the courtyard scene below.

A burra with a bleeding wound on her ear was standing in a large corral. Patricio was busy with arriving guests, so he introduced me to Rubio to check her ear. Rubio said that it might have been a bite from a monkey or bird; he was unconcerned. I felt sad for this apparently lonely lady, called Mirabella.

Rubio said he had to go to town to pick up his two daughters, who get out of school every day at noon. Rubio, and his lovely wife, Teresa, live right on the grounds of the hacienda. Teresa tucked me into the old car in the front seat so I could go along for the adventure. The family does not speak English. Because we were early, we rested for a bit in the town square.

Personal thanks to all for helping me earn “A huge shout out [from Kerry Kriger] to frog artist and educator Margot Fass, who celebrated her 77th birthday recently and reached her birthday fundraising goal of $1,000. Actually she blew past her goal and is now at $1,142. I’m sure she’d love to see that number rise, and so would I so if you love frogs and want to help
SAVE THE FROGS!, please visit Margot’s page and leave a donation:Donate! “