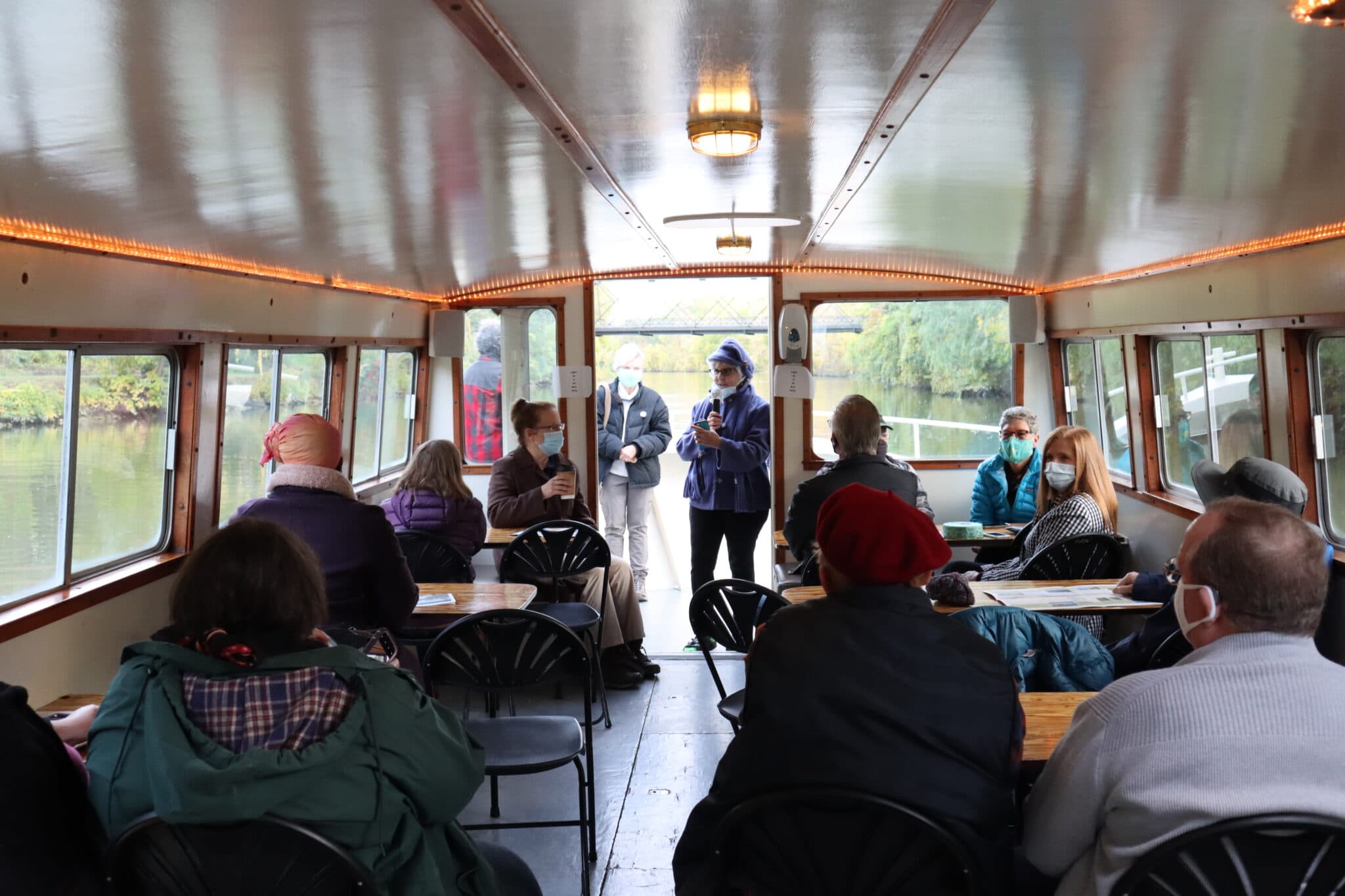 Being the stand-in educator on the Sam Patch required many hats.

It was so exciting to gather with A Frog House friends at the Sam Patch Packet Boat dock on Sunday evening, October 11. With a bit of the game of musical chairs, we had filled the allowed 25 seats (COVID-conscious; normally the vessel carries 50 passengers). Our first passenger, David Ross, was the winner of the raffle ticket at the Scavenger Hunt Birthday Party on August 9.

The weather was brisk, the colors bright, and the atmosphere buoyant. Robert Ament, owner of the Jembetat Gallery and Cafe, invited our peeps in before we boarded for complementary hot cocoa, hot cider, or gelato.

Now, as everyone knows, life has a way of throwing challenges. Unfortunately, our star speaker, Village Mayor Rob Corby, was unable to attend, being in quarantine after travel to the west. Rob rose to the occasion, however, and prepared notes beforehand for me to use. He also let me steal photos from his Facebook page. .

Rob is proud to be a Renaissance geek who knows everything about everything. Part of what he wanted to say is summarized below.  A Frog House always welcomes input from others, so I have added a contribution or two in context.

To be on the safe side, I decided it would be wise to hop on a 2 pm Sam Patch tour, and get my bearings on the various westbound sites Rob had in mind to discuss. Good preparation, but for the wrong ride!

When we were in the lock going back, I asked our tour guide, Wyeth, if he would point out Rob’s highlighted places. Wyeth said it wouldn’t matter, because that evening we were going east. A check-in with the captain confirmed that the locks are closed at 5:30 pm. A ride just to and not through the locks was impossible, because of evening winds, and narrow waters that made it hard to turn around.

So it was back to the Rob document to pick out more general information in the few hours I had between docking and embarking again at 6 pm. By taking out, revising, and reworking notes, I fortunately had much less to remember. Everything went without a hitch except that my notes on my phone looked like this!

Originally, the canal followed contours and often made bends to the south when crossing creeks or rivers. Engineers widened the canal twice and abandoned many of the old bends were in favor of a more direct course. Generally, creeks flow through culverts below the canal so the canal is not affected by flooding or sediment.

The newly dug canal route that passes south of the city diverted water traffic from the old route of the Erie Canal through Rochester in 1918.

The Erie canal is a manmade natural resource. The Genesee River feeds the the Pittsford section.

Native carp have populated the canal since its inception. As the water quality has improved over the last fifty years, other species such as bass and sunfish have become common.

For almost 200 years the Erie Canal has provided a riparian environment across upstate New York. Today it averages 120 feet in width and is 12 feet deep. Successional trees and shrubs that provide habitat for wildlife and access to water overgrow the south bank of the canal in most areas. It is essential to preserve these corridors, but there are problems.

Several years ago, the New York State Power Authority took over management of the canal. The Power Authority has proposed cost-cutting measures that jeopardize the navigational operation of the canal as well as its current riparian environment. Dewatering the canal, removing locks, segmenting the canal, and overzealous tree removal are but a few of the recent proposals. Due to strong public opposition, these proposals have not moved forward, but the future of the canal and the natural ecosystem that depends on it remain uncertain.

Pittsford lies over Silurian sedimentary rock layers (the Salina Group), deposited 425 million years ago on the bottom of a shallow sea. Pittsford Shale is distinctive layer of black shales at the base of the Salina shales. The Pittsford Shale contains a unique collection of heretofore unknown fossils including the Pittsford Eurypterid.

Fortunately, Donna Richardson was sitting near the front of the boat. She too is a Renaissance woman.

Pittsford’s geologic claim to fame is giant specimens of the above mentioned state fossil, the eurypterid. These strange-looking extinct creatures, whose only living relatives are horseshoe crabs, looked like giant scorpions.

During the Silurian period, before fish evolved, eurypterids swam in the slowly-evaporating shallow seas that covered this area. When the Erie Canal was being excavated, the diggers discovered a small layer right behind the former Spring House Restaurant. The shale was filled with giant fossil specimens of this creature, some reaching lengths of nearly seven feet! This layer was again exposed during the construction of the nearby Wegman’s and additional smaller specimens were discovered.

Sorry, but you can’t go dig up any of the specimens; this is a very small formation entirely covered under contemporary buildings. Some of the giant specimens were owned for over a hundred years by Ward’s Natural Science Establishment. There is still a diorama. of a big ‘un swimming in Silurian seas. displayed in the Rochester Museum and Science Center (you won’t mistake it for anything else if you look for it there).

We had on board an ambitious young attorney who shows a great deal of empathy towards those who are growing up in this society, and need to be guided by the courts instead of judged by them. He made a good case for himself, which is best written in his own words from his campaign page:

Michael Ansaldi: The goal of our criminal justice system is to get the best outcome for our community and its residents. As the ‘court closest to the people,’ the town court has an incredible opportunity to make a meaningful impact on people’s lives. When discretion is exercised, they should do so with our fundamental values of treating people with dignity and respect. I’m running and asking for your support for Pittsford Town Justice so we can continue improving our justice system, and working to live up to the motto ‘Justice for All.’

We were delighted to have a few Stetsons, a beanie, and some cloches, worn by all the other passengers on the boat. First, my right hand friend and fellow frogophile, from whom I have learned so much and with whom A Frog House has come so far, Katherine Denison; volunteer hostess and raffle princess Maria Venette and her partner Jim; three out of five of our new Board Members, Bonnie Garner, Eileen Buholtz, and Pearl Brunt; husbands Joe Blackburn and Peter Brunt, volunteer photographer; raffle winner David Ross and spouse Dorothy Ross; three good friends, Mark Augustin, Dennis Ebert, George Downer; and two other pairs of friends, Maria Valleriani and Kathy Goldberg, and Christine Massa and Rachel Webster; and surprise guests David and Mollie Lacona and Maggie Ansaldi.

It was a beautiful evening all around, a mix of foliage, sunset, and stars, both in the sky and on the vessel. Wyeth played “Fifteen Miles on the Erie Canal” and we sang along.

Thank you so much to all of A Frog House friends who care about the treasure that Pittsford is, and contribute to our success in adding our own little ounce of strength to preserve it. May we all stay in good health and survive the election.