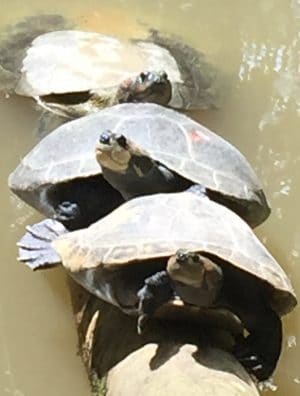 Today we were taken in twos and threes across the river in a pole boat, walked for 20 or so minutes to another  river landing, and  then rode by motorized water canoe to AmaZOOnico Rescue Center.

A young French guide, who had been volunteering for 3 months, explained that the animals are confiscated from illegal poachers and pet traders.  Many of the animal residents are injured from cruel practices, such as drilling holes through turtle or tortoise shells to hang them on ropes. These guys escaped that torture.

The paw raised by the front turtle did not move for a long time.  Our guide told us the turtles are always ready to drop off into the water in case they feel threatened.

Another water animal, definitely prehistoric looking, is the Caiman (in the muddy water, left).  In the alligator family, Caiman can grow from 4 to 16 feet long.

Some animals can be rehabilitated and released into the wild again, but if they have multiple behavioral problems and/or physical injuries, they cannot.

The baby monkey’s father is called The Killer, and probably will never be let out, although the mother and infant might.

AmaZOOnico has quite a bit of protected land outside of its enclosures, so released species can hang around nearby in relative safety, and the staff can also keep an eye out for how they are adapting.

One of the criteria for release is that the animals are NOT comfortable around humans.  Too much trust makes them vulnerable to being caught or killed.

The volunteers are supposed to avoid eye, physical, emotional and language contact with them.  The animals are not supposed to be called by name.  One person didn’t follow the rules, and the animal died of sadness when she left.

The animals do have names.

This Martin is not my husband.

Corn is a popular food both for monkeys and macaws:

Two other birds, a parrot with clipped wings, and a curious toucan, were also behind bars.

We also saw kinkajous, quatis, ocelots, jaguar pintas, and aguti rodents. We saw and heard about tapirs who not only have prehensile probosci, but the males also can point and aim urine at an unsuspecting intruder.  In captivity rather than running away as they otherwise would tend to do, a tapir can maul a person to death, especially if there are juveniles involved.

AmaZOOnico Animal Rescue seems like a really fine opportunity for volunteering or a charity to give to.  To learn more, check AmaZOOnico.

If I weren’t hoping to volunteer with Victor Luja in Mexico, and to work with elephants, I would seriously consider this myself, though I think we all need to steer clear of the tapirs.