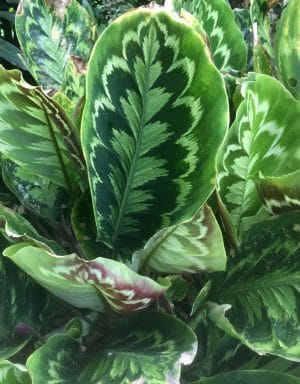 The little girl at the left, with her dog Cocoa, was at our “taxi station” out in the middle of the country,where the jitneys picked us up at the end of our walk to go to our next destination.

We were sorted into the 4 taxis, and bounced to a spot near a river which had two waterfall hikes.

Being unnecessarily proud, I started off on the harder path with the majority of walkers, but hadn’t gone up too many steps before I asked Michael Starkey to take me back to the other group. 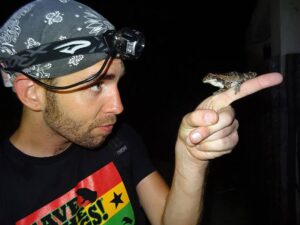 Michael, co-leader with Chelsea Carson, was a friend of mine from an online course I had taken in 2015 on environmentalism, through Save the Frogs! He is so enthusiastic when he talks about Save the Frogs, that he periodically inserts an adorable little plié as he speaks. If you search for Michael on the web, you can find a photo of him with Jane Goodall!

Michael works full time for Save the Frogs! and recently found his bride when both were hanging around the monkey cages at an environmental project where they worked.

The two now live in Gainesville, Florida. Michael is delightfully accommodating, and always ready to lend a hand to anyone, or a finger, to his own kind of pets. 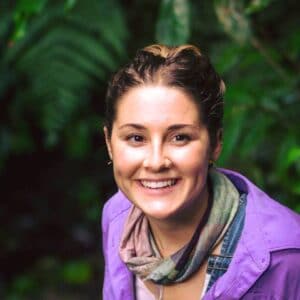 Chelsea won a Fulbright scholarship to study in Ecuador, and is well suited to the environment, customs and language of South America. She volunteered for Save the Frogs! for a year, and then became a guide. She led, by herself, a STF! Ecotour to Peru, and then teamed up with Michael for this trip. She will be a tiny bit busy, as she is starting her Master’s program this fall. Interview with Chelsea

She certainly was busy with this hike. She must have run back and forth between the two hikes at least 2 times, as we encountered Jennifer separated from the difficult group coming down the trail towards us. Chelsea elected herself to find and reunite them.

The “easy trail” walk, led by Chelsea and Walter, wasn’t altogether that easy, with the elevations, rocks, and mud. We wore high rubber boots on these walks, and more than once, we felt the boot gripped with the “schloop” or “ehchuelup” sound while we tried to lift our heavier than usual feet to march up the path.

(more about toilets anon).  He also had pointed out that I couldn’t see through my binoculars because I was looking in the wrong end!

Help to appreciate other scenery with my own eyes was unnecessary.

The path along the stream:

Patterns of the railings, not only for the colors, but also for the support they provided.

Both groups got to go to a different swimming hole near a waterfall, and ours was well worth the travel. The cold and splashing water was really refreshing, and lovely patterned leaves at the site intriguing.

When we all got back to the head of the trails, a wonderful lunch of fruit and veggies was served to us in the open shelter before we were off to our next appointment (if you can believe we have appointments in the jungle!)