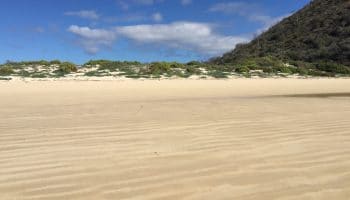 Floreana is known for its expansive white beaches,

and for flora (flores), such as this tree daisy, and other yellow (preferred by daytime carpenter bees) and white (favored by nighttime hawk moths) flowers.

Floreana’s biggest problem is fresh water, because the lakes and lagoons are brackish. This is great for flamingos (4/5ths of the world population of ruby Flamingos live on Floreana) and other sea birds, but not for humans.

Consequently, the island has a strange history of attempted settlement. English Pirates (legitimized by the crown) captured three Spanish ships (without their treasure) and took over 100 prisoners.

Most of the pirates and prisoners died of a plague or in battle at Guayaquil, except William Daumier, who went back home later to became a high society court writer and chronicler, described by Coleridge as “a pirate of exquisite mind”.

Other prisoners were brought over the years to their most certain death.

Whalers practically destroyed entire whale, tortoise, iguana, bird and fur seal population for profit and for sport. Herman Melville, a whaler hand in his youth, preserved the islands only virtually in a book of collected essays, The Encantadas.

Stranger yet, a married philosopher named Ritter brought his married mistress named Strauch to their “Eden”.  Strauch shared Ritter’s view on a natural life, including nudism. Ritter had prophylactically removed his teeth, knowing there would be no dental care, and she subsequently lost hers, sharing his dentures. Both were vegetarian and during a slip of principles, he died of eating either bad or poisoned chicken. Strauch, who could have been the guilty murderer of her lover,  went back to Berlin and  was killed in Nazi Germany during bombing.

Strangest of all, a self proclaimed German baroness Wehrborn de Wagner-Bousquet, came to her “Paradise” with three lovers.  She decided to elevate herself to Empress of Galapagos. The “empress’s” attempt to open Hacienda Paradiso failed. She and her favorite consort mysteriously disappeared. These two had mentally and physically abused a second lover, who was found dead on a distant island. The third’s fate is unknown, at least to me.

The most stable of the settlers was Margret Wittmer, who came with her husband Heinz and their son. After her family died or left and the other two irritating families were gone (or disposed of), she ran a guesthouse, wrote and published a book about, and lived alone on Floreana until the age of 96.  About 150 people live there now, many probably descendants of the Wittmer Family.

There still is an original “post office” in the form of a barrel. Our group spent time sorting through batches of postcards there to find some to bring home and mail or hand deliver. Each of us in turn left a dated and self addressed card with the hope that someone else also will mail or deliver it to us some day.

There were many other visually delightful sights of non living things, such as a shrine of objects placed  by various fellow travelers and clusters of shells along the path quite far inland from the beach.

There were ambiguous scenes.  Is this water or sky, or both?

The Ecuadorian National Park system is doing what it can to preserve Floreana’s natural wonders.

I did leave behind one other thing, a temporary and passing imprint of my shoe.

And God said “Hello”, right back.