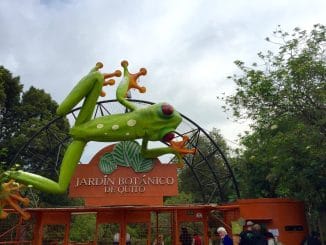 The light of day had broken through the rain and fog by the time we were ready to leave the Guayasamin Museum. Jennifer had to go back to the hotel to catch her shuttle to the airport. Melissa split off to see a famous cathedral in the center of town.  The rest of us walked for an hour or so down the winding roads to the Botanical Gardens.

The red eyed tree frog above the entrance to the gardens was indeed welcoming.  The visit seemed meant to be. 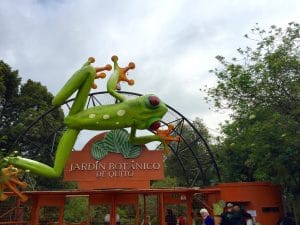 The grounds are spread out and attractively kept. Exotic plants,  “broom trees”, “bottle brushes”, and I presume, grasses, graced the trails.

It was easier to admire the fascinating Bromeliads in their manicured and showcased environment.

Plants that are relatively common in the United States are easily recognizable, such as the Cala Lily and Fuschia. Central and South America provide for much of the US market for cut flowers and floral plants.

When it comes to the orchids, I was struck by the variety in their appearance.

I wondered to myself just what makes an orchid an orchid. Imagine my surprise when I turned a corner immediately after that silent musing and saw the same question with an answer.

What makes an orchid an orchid?  The secret is in the flower.

Orchids have three equal sepals and three petals, one of which is more striking than the others and is called the lip or labellum.

The stamen (male) and pistil (female) are joined in one dominant columnar structure
The column is located generally opposite the lip, instead of symmetrically distributed around the flower.

The salient characteristic of orchids is pollen grouped in large masses or sacks called pollinators.

Given this definition, which of the following are orchids?

If you have had trouble deciding, you are not alone. The bottom of this sign reads:  Be careful, there are millions of species of orchids, and with many, only an observant expert can distinguish these characteristics.

The reason I have so many photos, and many more where these come from, is that my friend Melvin, for a change, had not brought his camera with him. As I moved about the greenhouse, he would point to a flower, I would take a picture, and he would point again. I swear he pointed at every orchid in that building!

The Botanical Gardens closed a half hour before the Vivarium, both part of Carolina Park.

In spite of our pleas and reasoned discussion, we were not given a break in the price of admission for the last half hour. The elfin twins got the senior discount, however.

Before we had set out from the Hotel Bernard, everyone except Jennifer had piled their luggage in my room. After a quiet dinner downstairs (Michael was “off duty” as of the night before and didn’t really want to talk frogs), we went up to my room, fiddled with our packing, played on I-phones and/or took naps. Michael, Conner, and Katie were the first to leave.

The last shuttle trip was due to arrive at Quito airport at just the time Matthew was getting in, so I hitched a ride with the shuttle driver, Ramiro, and my two remaining companions, Melissa and Melvin. 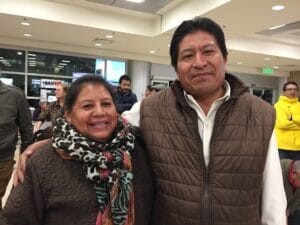 In order to practice Spanish, I found it was best to sit up front with the driver. Ramiro made a quick stop to pick up his wife, and after dropping the other two off at departures, the couple came in with me to greet Matthew.

Every Ecuadorian I met, without exception, was extremely friendly, cordial, and helpful.
And that was the end of one adventure and the beginning of the next.

Tune in next week for Matthew’s arrival and our adventures in Quito and Galapagos.