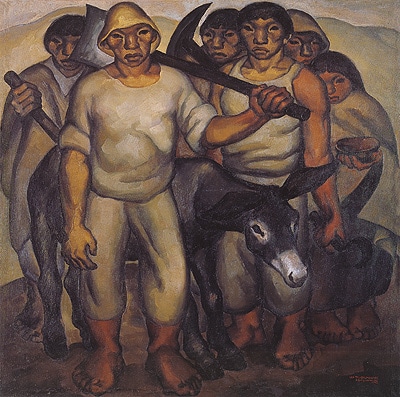 Michael was going out with a few of the group members that weren’t leaving until later that day. Chelsea, who wasn’t with us, had recommended the Museo Guayasamin.  Our group included Michael himself, Katie, Connor, Melissa, Jennifer, Melvin and me.

We headed up there in a few taxis, and ate lunch across the street at a tiny second floor mom’s restaurant, where my soup was served in a quaint bowl.

Yummy as always, the soup is gone forever. The CocaCola lingers on.

Nelson Rockefeller became one of Guayasamin’s first patrons when Rockefeller was present at the artist’s first exhibition, and arranged for him to come to the United States.  It is easy to see the influence that other painters, such as El Greco, Goya, Velasquez, Picasso, and Orozco had on Guayasamin’s ouevre.

Guayasamin dedicated his life to raising awareness of the cruelties and injustices of life, to which he was exposed at an early age. From 1945 until his death in 1999, Guayasamin depicted the poor and oppressed, and the brutality of those who oppressed them.  (Los Trabajadores, 1942) 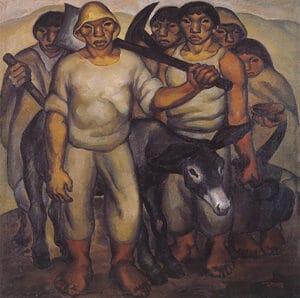 His “First Season” had to do with indigenous people in Andean countries.  He then produced 103 paintingsas he traveled through the Andes.  This series was called Huacayñán,  Quechuan for “Road of Crying”, (Prisionero, 1949) 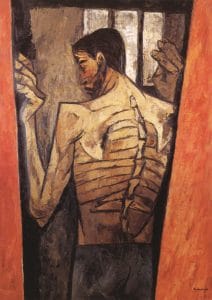 “The Age of Wrath” followed, with Guayasamin turning his attention to not just the sadness, but his anger having to do with unrighteous genocides by dictators and their bombs, including in World War II, civil wars, and with individual murders. (Tears of Blood, Bay of Pigs, Women Crying, Napalm Head, 1970s) 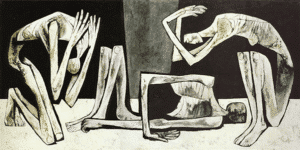 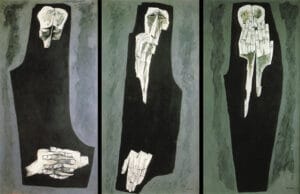 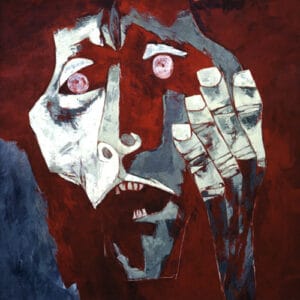 The hardest story for me was regarding women working in diamond mines who were raped, impregnated, and birthed children who never saw the light of day.

Guayasamin’s  third series, “The Age of Tenderness” was an homage to his mother, who supported her son’s desire to become a painter, but died at age 46.  He did many paintings of mother and child, at least until 1989. (Ternura 4 and 5) 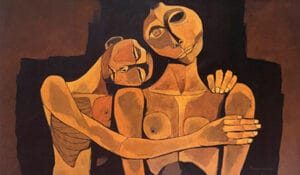 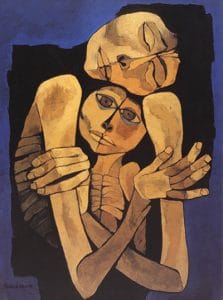 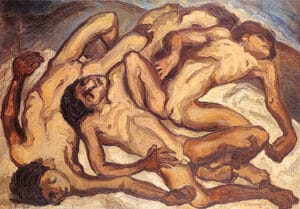 Guayasamin’s final project, The Chapel of Man, although it wasn’t completed until after his death, honors those who suffered, struggled, and achieved against all odds. The Chapel is dedicated to humans, because Guayasamin, an atheist, couldn’t believe there would be a God who would allow such horrors as his best childhood friend Manjarrés being killed by a stray bullet in a political war, and thrown on a pile of other corpses. (Dead Children, painted in “First Season”).

Other activist friends, including the musician Victor Jara (whose hands were either broken or amputated), were tortured, and subjects of Guayasamin’s paintings.  His friendship towards and support of other visual artists and musicians was given back in kind after Guayasamin’s death. Loyal always, they raised money through benefit concerts and other means to complete the Chapel.

Our guide referred to a book, The Wretched of the Earth, by Franz Fanon,  a psychiatrist theorist and activist studying racial differences, colonialism and revolution, offering an understanding of the psychology of movement towards liberation.  Written in 1963, with the first English translation in 2004,  this book was an important literary corollary to the rage, violence, and oppression depicted by Oswaldo Guayasamin.