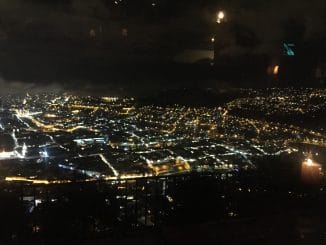 At 7 pm we took another bus ride up an ascending winding road. In Ecuador, sunrise is at 6 am and sunset at 6 pm the year round, so our second trip up a mountain was in the dark. The restaurant was built on the very edge of the world, and I was lucky to have a seat by the window.

This view is very much like one from a Reggae place on a mountainside in Jamaica, and one in Hong Kong when I was in my teens, among others I have seen. Many of my readers have been treated to similar sights, and know that what makes the sparkling lights so special is the people we ae with. This evening, Melvin was on my right, Chelsea, Jaime, and Victor across from me.

It was the first chance I had had to talk very much with Chelsea, so it was nice to hear about her previous and upcoming experiences. The Peru Ecotour she had led did not initially appeal to me, partly because I was holding out for Ecuador, and because in the beginning it was advertised for just women. As she explained her involvement in the Earthfire Institute Wildlife Sanctuary, and her understanding of Spiritual Ecology, an all female tour made much more sense.

If we are to restore the balance in our world, we need to go beneath the surface to heal the split between spirit and matter and help to bring the sacred back into life. —Llewellyn Vaughan Lee, author of Spiritual Ecology, The Cry of the Earth.

Hmmmm, Cry of the Earth? Isn’t that what I was thinking when I took that picture of the tree back in Papillacta?

Speaking of spiritual, what would I have done on this trip without my pal Melvin? He was clearly a friend that I have known for all eternity. From the first encounter in the garden, we, not always, but often, were together at meals, on walks and the bus. Sometimes there was no need for conversation, and I had come to the conclusion that we were “gemelos duendes” (elf twins). This is the photographer for the great shot of me you have seen in other posts.

This dark and noisy place was the end of our formal journey together. Our group goodbye therefore was out in the parking lot, in front of the bus, where Michael and Chelsea thanked us for joining them, and, because of the timing of our airline flights, hugs were exchanged between those who wouldn’t see each other again. But there was more to come for a few of us.