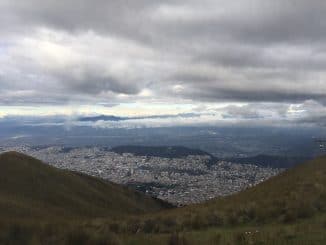 In lieu of a scheduled early morning hike into the Pululahua Geobotanical Reserve, I appreciated the view again from my bed that morning before breakfast, through the condensation on the window.

At 10 we were off for the relatively short drive back to Quito, arrived at Hotel Barnard to leave our baggage, and were led to El Centro Histórico to browse in the markets for the end of our souvenir shopping. I bought a pair of tiny frog earrings for $3 (they use American dollars in Ecuador), one of which promptly separated from the backing.  I have the parts somewhere to glue, but you know how that goes.

For lunch, we were on our own. Wandering back to the hotel through the park, I noticed that Ecuadorians possibly love movies and theaters even as much as my husband Martin does. He likes old theaters though, and the Sala de Cine is definitely a modern work of art.

The colorful buses complement the bright bridges, or is it the other way around?

At 3 PM we boarded the bus again for Teleférico—a gondola ride up to Cruz Loma—which everyone had chosen over a walking tour of Quito.

The gondola ride takes 20 minutes from the sprawling densely populated city center to Cruz Loma, 2717 feet higher.  We got a glimpse of the former Quito airport, into which my friend Melvin Grey had flown on his first trip to Ecuador.

City planners had the foresight to make the abandoned airport into the largest park in Quito. It is that large green arrow shape in the middle of the bottom third of the photo above the downward curving arc (the second green line from the bottom).

The original Mariscal Sucre International Airport was one of the busiest airports in South America.  In the year 2000, there were more than 2000 connections a week made just by the airline TAME.  The terminals were located at an intersection of two major city avenues.

Melvin delights in describing the harrowing tale of several tries the pilot made to guide the airplane precisely onto the relatively short and narrow old Mariscal Sucre International Airport tarmac. Residential houses on both sides of the plane allowed passengers to look out at people on their porches and at their windows, who looked back at them.

When the plane had safely landed and stopped, everyone, inside and outside the plane, cheered. Melvin said to the stewardess that he didn’t know they were going to alight in the middle of the city. She replied that they had just flown into one of the highest and most dangerous airports in the world, where only especially trained pilots were allowed to land.

He also didn’t know then that there were at least six accidents in the few years before the airport was moved in 2013.  Dear Melvin, we are glad that you were with us to tell the tale.