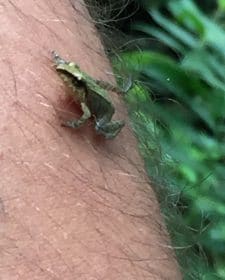 Another frogging night, better than the last.  Yes, I saw some interesting things, such as a round black snail, a round tan fungus, and some green and white spiral and striped leaves, more intensely colored under headlamp light.

There were clusters of spiky orange flowers, little white flowers and a spider nicely silhouetted on a red blossom.

But that’s not why I came to Ecuador!  This Friday evening started out with a tiny green frog that landed on Victor’s arm, a perfect SAVE THE FROGS! poster child.

Except, of course, we were in Ecuador.

The frogs are soooooooo small that one really has to be alert not to accidentally step on or otherwise injure the miniature creatures.  They are made very much like ourselves, but are far less aggressive. Try to find the frog on the leaf.

The cloud forest is so alive.  This was definitely a better night for me than any of the others, but the best was yet to come. 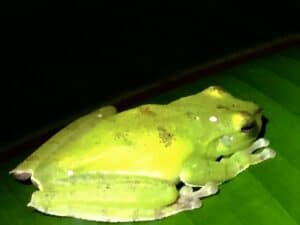 Again, I happily slept in, and vicariously got to enjoy Melvin’s and the other bird fiend’s crazy 5 a.m. expedition.

Apparently Ecuador was a little put out that Peru chose the Andean CockoftheRock for its national bird, and got the Andean condor instead. However, Bolivia, Chile, Colombia, Peru and five other states have used the condor as their national symbol as well. Is it a case of “what’s mine is mine, and what’s your’s is mine also”?

Many of the group that had gone zip lining the day before, todaywent to the Butterfly Garden.  Our adventure at 10 am was to take a cable car across a long ravine.

Of course, I lagged behind the group, but, bless his soul, Michael stayed with me and helped me in the usual way, with a hand, a wrist, a shoulder, a pull or a push, as required.

There was plenty to see. Nature’s art and how many of our archetypal images and creative combinations form have always intrigued me.

As a precursor for a BIG surprise later, Michael scooped up a little friend to introduce us briefly before putting it back in the stream where he found it.

Our destination: Esperanza waterfall.  Michael and I were comparatively so late arriving that we only got to see it for a few minutes before turning back.

The absolute piéce de resistance however, was what Paolo, walking behind me, spotted.  It was literally no bigger than a spot on my shirt, much enlarged for detail.

What spiritual meaning could there be for this gift?  Did it fall at just the right (or wrong) moment? Did I brush up against a branch where it was hanging ready to fall? When we got to the edge of the stream, Michael carefully transferred it to a leaf, and tenderly carried it to the water where there was a quiet pool. Good luck, little tadpole!