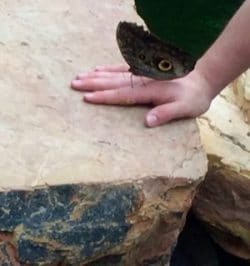 Chelsea took us on a walking Spanish lesson.  Here is an attempt at putting her words into a Spanglish paragraph.  See if you can figure out the meaning of the Spanish from the context.

Before I went on a walk, I put on my (ropa de campo), my shoes, and (gorra o sombrero).  I used my (repellante) because I did not intend to touch any wildlife.  All of my (equipo) was in my (mochilla).   I carried my (baston) for stability.

We walked by (arboles) with very rough (cortesa) and covered with (musco).  Sometimes it was difficult to trek along because of the (palos) from the trees, and branches with (hojas) in our faces.

In the orchard there were (limos) and (citrico) trees.  At first I was worried, because I could only see the bed of an (arroyo seco), but soon we came to a small rivulet which became a (rio) that fed into a (charco). Just past the pond was some flooding that created some nice (humadales).  It was so wonderful to hear the sounds of the (ranas) that I didn’t even care that I had a sore (rodillo), a scratched (pierna) and a stone in my (zapatos).  The stone hadn’t damaged my (pie) when I removed it with my (dedo), which did get cut, so I bit my finger with my (dientes) until it stopped bleeding.

After lunch we had a choice of ziplining or going to the Butterfly Farm. It seemed to be the better part of wisdom to skip the former, and I thought I would get some fine photos at the latter. It was definitely a good hike to arrive there and an enchanting place to relax inside.

The display was very well organized, and showed the stages of development, a great variety of caterpillars and pupae.

When the larvae hatch, the butterflies hang on for some time to dry.

They move a short distance  away, dry for another 24 hours, and then are on the wing. Some are let free into an outer, bigger, area, and some are kept for breeding.  We didn’t get to go outside, because it was raining hard and it was the closing hour.

By the time we were supposed to go, the pair on the gravel were still at it.  I called the attendant, because I was concerned that they would be stepped on.  She carefully put something under them and moved them to a bush.  She said sometimes they stay locked for a day or more.

Also I asked her about one red butterfly dive bombing another of somewhat different markings and colorings. The interpreter said that the in flight butterfly was flirting with the sedentary one. Whenever I came near a red butterfly, it would close its wings, as if it knew what I wanted and was playing coy.

My last question had to do with a yellow morpho butterfly who was wildly flying from place to place in a very frantic way.  She said they get that way when they are trying to find a place to leave their eggs.  After they do, staff members carefully collect and incubate them until they hatch.

In the meantime, an owl butterfly sat on Levi’s hand the whole time we were there.  If you were Levi, would you have even breathed, let alone move away?

None of us were in a hurry to leave.

Our guide from Casa Divina decided to call a cab for our ride home because of the rain, and I had time for a nice bath and some stretching before supper.