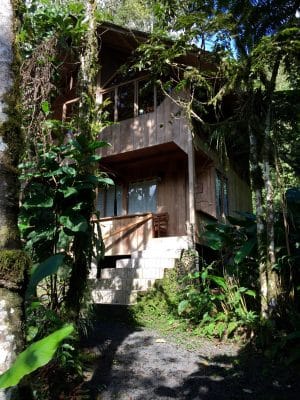 Around 4:30 pm, we arrived at Casa Divina. It seemed that each place we stayed got better and better. Our stay was for 3 nights, and I could have stayed for 3 weeks, happily.

A Cabin for Crystal, Stephanie, Katie and me.

A Really Good Omen. Welcoming frog on the window, sighted from the supper table.

All of our boots were sterilized with a small amount of chlorine greatly diluted with water for our evening frogging walk. Melvin continued to sport his fancy white rubber boots, and I acquired some red ones. All the others were black. SAVE THE FROGS! had purchased some boots at the beginning of the trip, and were kind enough to leave them behind at Casa Divina when we left 3 days later.

Other sights lit up by our headsets included yellow fungus, green bamboo, and yellow orchids. 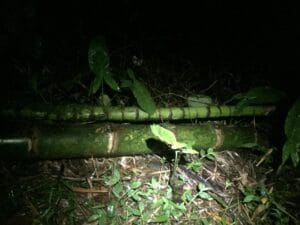 While I happily slept in, some of the crazier members of our group got up for 6 am bird watching from the open second floor and around the reserve.  After breakfast, we met up in the lovely airy space upstairs the others had started from.  Efrain and Molly told the story of their love and partnership.

Molly was 21 years old when she came to Ecuador as an exchange student. Here she met Efrain, and was impressed with his passion for preserving the environment and organizing the people.

After several years of being good friends, they had the opportunity for a long discussion on a bus ride to another part of the country. By the end of the trip they had decided they ought to marry.

Within two weeks they did just that, and now have two lovely daughters, as well as their beautiful home that they built and share with guests. We were so fortunate that they did!

Efrain is an owner naturalist who actually went out with us for our walking adventures.

Michael followed Molly and Efrain with some Frog Facts. He pointed out that children often don’t know the word bioindicator, or the concept of a “canary in a coal mine”, but they do understand the idea of a thermometer. As the world, and harmful practices literally and figuratively heat up, the frog population diminishes.

Brave little creatures!  Why are we so mean?