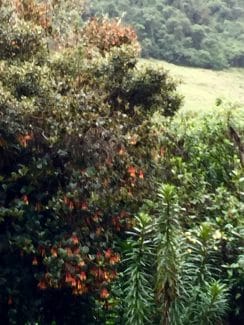 During a short break at our morning presentation in Anaconda, I saw this on the floor of the lodge. What kind of bird, just from the beak, do you think it is?

The gladiola like plant was growing in front of the modest staff house near the lodge.

The beautiful red, pinks, orange and yellow of the flowers must have inspired a lot of the colorful costumes in South America.

Coincidentally, the gold and white butterfly was one I already had selected for my next Froggy Family book.

Lunch time before our departure from Anaconda Lodge was emotional, as Francisco was crying. While he might say this to everyone, his claim was that we were the best group he ever has had.

The motor canoes landed right in front of the lodge to take us back to Puerto Ahuano, to meet the bus for our 3 hour ride to Papallacta.

We were in for a treat when we arrived at Papillacta, with a thermal pool soak in the misty cold weather, as well as a fine dinner, where my imagination was working overtime. Who recognizes this strange insect?

In the morning, we walked to and stopped briefly at a small interpretive center at the head of the trail into the ecosystem at Papallacta, called Paramo, near the hotel. Theoretically Paramo is connected to the Cayambe -Coca National Park, but according to staff at the desk, that preserve is many miles away.

If others made it all the way up the trail, I certainly did not. The elevation was getting to me, so I walked more slowly and less far than the hotshots. However, I rather enjoyed being alone, as it reminded me of the many happy times I had walked by myself as a child through fields and forests in Vermont, and in some spots the landscape was actually similar.

Do you see a scopolamine (borrachero) tree? Scopalamine is very powerful, preventing the formation of memory of events during its presence in the body. It is harvested for medical purposes in Ecuador, and in small doses has many uses, including for sedation, motion sickness, and to treat Parkinson’s Disease. In Colombia, sadly, it is used for theft, human trafficking,prostitution, rape and murder.

My husband and I are fond of Kurt Weill, and one of our favorite operas is “Lost in the Stars”, based on Alan Paton’s book “Cry, the Beloved Country,”  based in South Africa.   Even the tree stumps cry in Ecuador.

After a lunch of vegetables, rice and beans at a local restaurant, we had a 3-hour drive to the cloud forests of Mindo. At a bus stop in Quito, we said goodbye to Jaime, and hello to Paolo. Coincidentally, Melvin had been on a previous wildlife photography trip in Ecuador with Paolo, so he was quite excited to see him.

Paolo is definitely quieter than Jaime, very sweet and thoughtful. Paolo also is working on a field guide, which he thinks will be more user friendly than the comprehensive book The Amphibians and Reptiles of Mindo  istarting his own business of ecotours. The website is not developed yet, but take a look at the instagram photos on the link Neo Selva, the name of his new company.

Help us advocate, collaborate and educate.

Donate to A Frog House