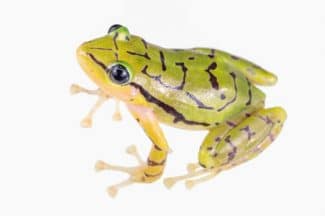 Until I got home, and looked up information on Jaime Culebras, I didn’t know how lucky we were to have him with us for the jungle part of our tour.  Jaime is a professional wildlife photographer working on an Ecuadorian Amphibians and Reptiles field guide.

It turned out that he has been involved in the discovery, description and photography of six new species of frogs this year alone. Two of them are Pristimantis ecuadorensis and Hyalinobatrachium yaku.

Information about Pristimantis ecuadorensis was first published in Plos One, although the news found its way to National Geographic and to Science Daily  as well as other news sources.

A few interesting facts about Pristimantis: their eggs yield fully formed Froglets, skipping the tadpole stage, and the little creatures scream when frightened. They are endangered, because their range is small and local, and serve to convince conservationists that the northern coast foothills need protection as much as the rainforests.

Another “Jaime frog” is a kind of glass frog, Hyalinobatrachium yaku reported initially in ZooKeys, and elsewhere (eg Phys Org).

Juan M. Guayasamin, Universidad San Francisco de Quito, lead scientist in these discovery projects, described Hyalinobatrachium yaku as distinguished from other glass frogs by a more visible heart, and dark green spots on its back.

On Wednesday morning, Jaime gave us some tips on the best way to photograph life in the wild.
-Have a waterproof camera.
-Use a wide angle lens to more effectively show the planes of the landscape,
-Know how to set shutter speed and aperture to obtain the best detail.
-Use a white background for more subtly colored wildlife, and black for strongly colored animals
-To take videos, hold the camera in the horizontal landscape view.
-With a frontal view, it is fine to break the off center rule of composition.
-Focus on the eyes of your subject.

After Jaime’s presentation, Chelsea talked about conservation. Speaking of crying frogs, and empathy for the helpless, she told us about a job she had in the field that required toe clipping for species description and the expression of morphology through genetics and epigenetics. One frog screamed in her hand, and she quit.

The frog demise has been described as “the perfect storm”, defined by Wikipedia as “an expression that describes an event where a rare combination of circumstances will aggravate a situation drastically. The term is also used to describe an actual phenomenon that happens to occur in such a confluence, resulting in an event of unusual magnitude.”

As such, frogs are essential bioindicators, as I first became aware through a chapter in the New Yorker magazine.  This was an excerpt from Elizabeth Kolbert’s book, The Sixth Extinction, An Unnatural History.  The ominous and serious subtitle is “There have been five great die-offs in history. This time, the cataclysm is us.”   New Yorker 2009.

According to Chelsea, we cannot protect what we do not know, and therefore identifying and understanding species is essential. Aspects of conservation she mentioned as being important include:
-buying and protecting land
-education and employment in environmental jobs
-advocating against the use of poisonous pesticides and fertilizers
-sustainability
-money is still the belly of the beast. How can conservation benefit humans economically?

With Chelsea and company on board, all of humanity will benefit economically, physically, emotionally, socially and spiritually.