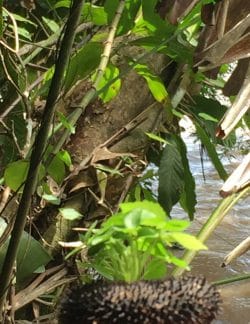 Cesar told us that the nectar drips out of the funnels in the blossoms of this ascending flowering vine, and makes an infusion to drink.

Curare venamo is a product of some trees we saw. Curare is used to kill when rubbed on the point of an arrow and shot, often through a dart gun, at the victim. (So is poison from the skin from a poison dart frog!) Voluntary and involuntary respiratory muscles are paralyzed, so the wounded being cannot breath.  If kept alive by artificial respiration, the effect of paralysis wears off. Curare, like morphine, is useful in this way during surgery.

Rubber and mahogany trees both are stolen from the forest. The rape of Caoba mahogany in South America began with Spanish shipbuilders, and continues to this day. It is a beautiful hard wood suitable for even the finest of musical instruments, let alone furniture and flooring, and most of it is imported to the United States.  While I don’t know the statistics for Ecuador, apparently 80 to 90 % of mahogany harvested from Peru was illegally taken to supply our appetite for beauty and durability.  Brazil banned the export of mahogany in 2001. The slow growth of mahogany makes reforestation difficult.

Naturally growing mahogany sheds its bark every year, and at this time, was very smooth, red and COOL, and so provides a respite in hot weather (as we had in the jungle in June). There was more than one reason I had to put my arms around it.

When we got to the bottom of the trail again, Connor discovered a natural terrarium growing in what is called a Monkey’s Comb.

It is so called, because monkeys use this bristly doughnut shaped casing for grooming. I knew this, having learned about them and taken this photo of a monkey comb tree in Costa Rica.

It was a day full of information already, but there was more to come!