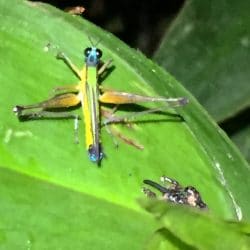 Francisco is a very intense guy from Chile with quite the history, which he didn’t hesitate to share with us over the next several days. He had been a heavy drinker, an alcoholic CEO of a bank, not knowing what to do with his money other than acquiring many Mercedes, as long as they had fewer than 5300 miles on them. When as a 42 year-old bachelor he met Silvia from Colombia, she turned his life around, and he gave up his lucrative but unsatisfying career to become an activist on behalf of indigenous people and the environment.

When Francisco wanted to buy nine hectares on the island to start an eco-friendly tour lodge, the broker told him that he would have to pay the same amount of money whether he bought the whole island or only part of it. He chose to get the entire property, and then turned around and sold it, minus nine hectares, for a dollar per portion to the natives who previously had been driven off their island by the military.

Francisco has been jailed three times for speaking against the government, but that hasn’t stopped or slowed him down. On the way to the island, we had passed a Swiss Hotel. Apparently one day the Swiss Hotel drone was hovering around the Anaconda property. Francisco called the owners to cease and desist, and recall their drone. After an hour, there had been no retraction. Francisco got out his pistol and shot down the pesky intruder.

Francisco also said that he nearly threw the CEO of Texaco off his property. He couldn’t understand why such a person would come to his lodge anyway, but got angry when he heard disparaging remarks about the people and the land. Somehow the two were able to resolve their differences, and the man ended up staying with a new sense of respect.

About half of the group went for a hike that was going to be repeated the next day. I decided to shower, nap, and get some laundry done, which is the only way in Ecuador to get dry clothes.

Every night was a frogging night.  As usual, we saw as many other interesting creatures of the night as we saw frogs.

It is important to look both on top of and underneath the leaves. Here are some leaf surprises. How many frogs do you see in these four photos?  Is there more than one?

Is this limbless amphibian called a caecilian, or a snake? How does one tell the difference?

And is this limbed amphibian a frog or a toad?  Again, how can one tell?

When I followed the hotshots into a swampy area, it was hard to see with mosquitoes and other insects swarming toward my light, and I hadn’t brought my head netting. However, my reward was getting to see three frogs. With help as usual, that is.

Victor stayed out late that night helping Melvin with his photography; I was only too happy to go to bed.