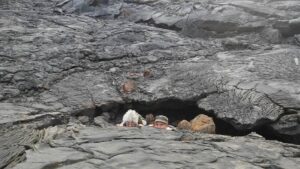 That mere toothpick traversed a minute portion of the Pacific yesterday and carried all 15 of us from Floreana.

Travel and transportation of living things is amazing in and of itself. All of the life on these islands, created exclusively through volcanic eruptions from under the sea, traveled also by sea or by air to differentiate into the endemic species we can now enjoy.

The Galapagos islands all sit on a underwater tectonic plate, which is moving southeast. The younger islands are northwest, the older southeast, and either have disappeared underwater, or will eventually.

Santiago is an younger island than Santa Cruz. To look at a relatively recent lava flow is to appreciate not only the loss of life that might have occurred during an eruption, but the difficulty of life coming again.

The surface heaves, cracks, explodes into minivolcanos (driblets), and/or exposes levels below.

The hot and quickly cooled lava forms in thick puddles and rope like twists which would belie the possibility of any foothold. Then, lo! A tiny seed of lichen blown in from afar, and manages to cling to an apparently impenetrable surface.

Little by little, this seed sprouts short fine stalks, and puts down long strong roots, gradually crumbling the rock. Water, both from rain and the sea, also wears the hard surface down.

The red “soil” is the result of  a combination of iron, calcium and potassium in volcanic spatter.

Some accents of green can be seen, and occasionally the start of a cactus.

Since Cactus provide water and food to the vegetarian land Iguana, and Iguana can survive the cold, hot and dry conditions of a lava field home, it is no surprise that they flourish together, as on the older island of Santa Cruz.

Every lava cactus has a unique shape,

every Iguana a unique personality,

and every Iguana is uniquely coupled to another.

Iguanas mate when they are 11 to 14 years old, and live for 70 years. These prehistoric characters have been around for some 300,000 years longer than the islands themselves. Once they become isolated, like other forms of life, they evolve into differentiated, endemic species, such as pink iguanas on San Isabella, among 10 others throughout the islands.

Iguanas are hunted by hawks, which sit at the entrances to their caves, but the reptiles often manage to elude their predators by having more than one entrance to the same home.

Snorkeling twice that day yielded some new species and variations thereof: hogfish, puffers, sargeant majors, angels, damsels, balloon, trigger, chubs and sea cucumbers, in addition to many of the fish seen before. There were all kinds of starfish, bright blue, bright red, “chocolate chip”, either alone among other marine life, or scattered about like the night stars on an otherwise barren sandy ocean floor. I saw sea urchins of various types, and some beautiful intact sand dollars. The perfect ending to our day was going into a small cove at dusk, and seeing two groups of three penguins! It was definitely the highlight of the whole adventure.  And of course, no working camera!