This morning’s hike was a dry landing at a flight of very steep rocky stairs, known as Prince Phillip’s Steps. We were greeted at the top by a mockingbird, singing a happy welcoming song.

As daunting as it was to go up the staircase, we were rewarded for our climb with the sight of innumerable boobies: Brown, Hooded, Masked, Nazca, blue footed and red footed, single, married, divorced (they don’t mate for life) and children, in various stages of development. Apparently there are 150,000 pairs on Genovese. The juveniles have grey or white feet, and some, called morphs, never develop color nor mate. The color in male feet is a sign of very high testosterone, and male boobies are known as the most aggressive birds in the world. 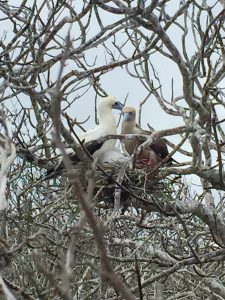 The Nazca mother lays two eggs a few days apart, but the second is only insurance, in case the first dies.

If the first chick lives, it inevitably pushes the second out of the circle the mother has drawn. A chick out of the circle, neglected by both parents, is not fed, and will die of exposure, starvation and/or predation by other birds. Once airborne, they can fly as far as Panama, and do not come back for 5 or more years, mating at age 8.

Nazca Boobies are named for the giant geological plate “conveyer belt” which carries the Galapagos Islands southeast at a very slow but significant speed. 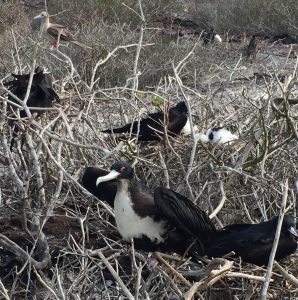 We also saw gulls, herons, pelicans, frigates (Both sexes are pirates.  Males have a big red balloon gular sac and gobble when they find a female they choose to attract) and albatross. 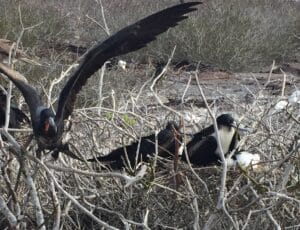 The mating dance of albatross is mesmerizing, and goes on for hours, a tender fencing duel with their beaks. Of course, this is when my camera died for the day. These big birds do mate for life.

Although the water was murky in the morning, I got to see one new species of fish, the Moorish Idol. Next year I want to get an underwater camera!

In the afternoon, I had started reading Paul Stewart’s book, Galapagos, The Islands That Changed the World, which Matthew had discovered and just finished. While the others went to the beach for a hot sunny walk, and then snorkeling in choppier and murkier waters than in the morning, I relaxed under the canopy on the deck and read. It was a delightful and educational way to end our last full day on board the Cachalote,  and gave me more to fill in some blanks when I got home.

To celebrate, all the crew dressed again in their uniforms, as they did the first night we got on board, and we had a fine cocktail to toast with and another excellent meal with modifications for their vegan passenger.