At my several rests on the daunting climb and decline, Carlos was trying to make calls to various mechanics. He was justifiably distressed to be told that repairs to his car would cost $10,000. How did I guess that he was talking about a Mercedes Benz? 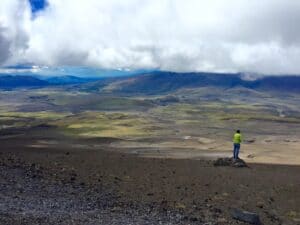 Carlos and I had great good luck when we got near the van, where we had the rare opportunity to spot a condor flying low along the rim. Carlos, standing at the edge of the world trying to find the great bird again, grumbled that the condor probably was eating lunch somewhere down below where it couldn’t be seen. 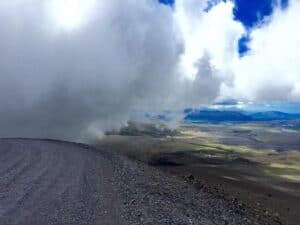 The group was fortunate that Cotopaxi wasn’t covered in clouds, as it often is, but they did roll in before we left the park.

On the way back, we stopped for “lunch” at 5 pm in a tiny village for another one of those extraordinarily delectable meals, with soup of course, which Alexander had ordered at the outset of the trip. It was a pleasant stop and opportunity to talk with a few of the others, including one who might be Victor’s future student.

During the entire year, the sun rises and sets at 6 am and 6 pm respectively. Alexander said he wanted us to go to sleep on the bus ride back to Quito, so he would tell us stories. He used his dramatic talents recounting several old Ecuadorian legends, in English and in Spanish. 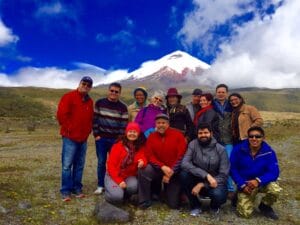 There once was a son of a great warrior who was taught to fight and kill. However, the boy, who was prideful, got excited about killing and used his bow and arrow to shoot a beautiful bird. When he brought the bird to his mother to brag about what he had done, his mother was appalled. She told her son that it was one thing to kill someone who was trying to steal your land or your life, but to kill a beautiful bird who never does any harm, and provides us with songs, is unacceptable. His mother plucked the most colorful feather from the bird and made him wear it from that point on, as a reminder never to hunt innocent life again.