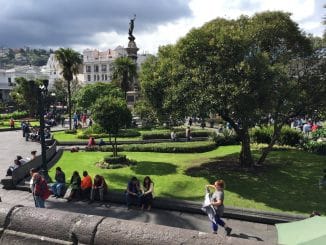 Matthew and I had a few days to explore Quito. The first day we walked to the Old City, in the center of which is La Plaza de la Independencia. It was a good hour-long walk on the many hills, both up and down, with much to look at.

Resting in the park, previously and colloquially known as the Grand Plaza, Matthew  found and recommended La Purisma, a few blocks away, for lunch. We had a delicious meal, and a beautiful view of the street outside our window.

We then visited the Centro Cultural Metropolitano. The most interesting aspect of this museum to me was the uses to which it has been put over the centuries, and the fact that the third floor once was essentially destroyed by a fire started by overenthusiastic partiers in 1929.

At the time of the foundation of Quito, in 1622, the building was a monastery for the order of the Compañia de Jesus. It included the Universidad de San Gregorio Magno. Jesuits were replaced in 1767 by the Spanish crown and Dominicans, and the university was renamed as the Real Universidad Pública de Santo Tomás de Aquino.

In 1826, the increasingly independent Republic of Ecuador used part of the building for a city university. Liberal ideas there helped the transformation of the Republic, started in 1809 and finalized in 1830, into the new state of Ecuador. In 1836, the two colleges merged into the Universidad Central del Ecuador.

Seventy three years after the fire, with university life coming and going, the building was finally completely renovated. The original uses were restored, with touches from its history including personal libraries, printing, artistic, historical, geological and biological antiques.

Back on the street, we spent some time listening to two possibly once famous, now blind street musicians. Matthew was impressed with the accordion player, and bought Volumes 2 and 8 of their seven CD’s.

It was refreshing to see some healthy protest in the park. Earlier, in the morning there had been a parade for the solstice (Festival of the sun), but in the afternoon there was a definite demonstration against Monsanto, GMOs, and capitalistic exploitation.

We then visited a money museum that included stamps,

and the history of the economic oppression of people and land by a few wealthy foreigners seizing and exporting cocoa.  Some stories never stop repeating.

After all that, I was happy to take a taxi back to the hotel. Little did I know that our adventures for the day were not done! During our rest, Matthew discovered a restaurant with the fascinating name.

Laboratorio is a “conceptual restaurant” where the chefs change every 3 to 6 months. Each applicant must submit a resume, then a sample recipe, and finally, cook a dinner for the “judges” in order to be considered for a position. Our particular chef has been there for longer than 6 months in various roles as sou chef and chef. He was also the only person on the staff who spoke English.

The building was originally a wire factory, and they have maintained many of the original aspects of its history.

My extraordinary and delicious meal was served, not on a plate, but on a 2” thick cross cut of a tree, varnished to repel liquid.

So, happy and full, we went back for an early rise, because Matthew wanted to take the morning scenic train ride through the country the next day. However, it turned out that it was not to be.